Born in: 1896  - Died in: 1940
Italo Balbo was born in Quartesana (Ferrara) on 6 June 1896. He was a squadrist, aviator, hierarch, one of the most capable and prestigious figures of fascist Italy. He died June 28, 1940 under the 'friendly fire' of his own anti-aircraft in the skies of Tobruk, Libya. His military career began as a volunteer in the first world war, among the ranks of the Alpine, where he received two bronze and one silver medals. After the war he studied in Florence, where he graduated in Political Science, then returned to Ferrara to work as a bank employee. In Ferrara he decides to join the fascist party, soon becoming secretary of the local section. It's a practical choice: you have to take sides.

Italo Balbo is a man of action, violently anti-socialist, anti-democratic and nationalist, he chooses the ideal closest to his character: the fascism of Mussolini. He began to organize bands of squads, forced the Florentine laborers to join the fascist union. In 1922 it is already a quadruple of the march on Rome. The jump in the Olympus of the fascist hierarchs is slowed down by a crime. In 1923 he was accused of being involved in the murder of the parish priest Don Giuseppe Minzoni. Italo Balbo to defend some squads in the investigation, claims that it was not a political crime but that it is a showdown for a question of women. He succeeds in his intent and the guilty are acquitted due to insufficient evidence.

But Mussolini does not want all this clamor on the story of Don Minzoni, he does not want any disturbance at a time when he tries to prepare the arrangement. Italo Balbo has respect for Mussolini, but does not adore him. He considers himself a true fascist, the 'second' fascist, and as such he addresses the duce giving him the 'you'. He is able to moderate his political affirmation with the acceptance of Mussolini's leadership. On November 6, 1926 he was appointed Undersecretary of the Air Force. Start a series of ocean flights that will make it a national hero and will make it well known even beyond national borders.

The first transatlantic flight is from 1930, with 12 seaplanes, departing from Orbetello to Rio de Janeiro, Brazil, the trip took place from December 17, 1930 to January 15, 1931. From July 1 to August 12, 1933, he drove the 24 seaplanes on the return flight from Rome to Chicago. The governor of Illinois, the Mayor and the city of Chicago reserve a triumphal welcome for the Italians, an ovation to Balbo. Balbo manages to use his air exploits as a propaganda tool. At that moment his international prestige surpasses that of the leader. Mussolini senses it and transfers it to Libya, as governor of the Italian colony.

It is January 1934. Balbo goes to Libya reluctantly, after Badoglio and Graziani, after mass extermination in concentration camps. Italo Balbo makes them close. The architectural restructuring of the colony begins, but the most effective propaganda idea is the transfer to Libya of twenty thousand Italian peasants, to whom the colonial lands are entrusted. This is also a success cha Mussolini does not like. But the hardest clash comes when Balbo explicitly opposes racial laws and Italy's entry into the war alongside Germany. The reasons for dissent are practical and not ideological: Italian troops are not ready to face the war. On 29 June 1940, the nineteenth day of the war, Italo Balbo made a reconnaissance in the skies of Libya, when his plane was shot down by the Italian anti-aircraft at the height of Tobruk. It is a dramatic mistake.

The death of Italo Balbo has always fueled conjectures and hypotheses on mysterious plots, this is due to the fact that to knock down the plane of Balbo was an Italian machine gun, but the only mystery is related to the personality of the leader, to his jealousy for the successes of Balbo, an aviator, a bearer of men, a capable organizer, a brilliant propagandist. The certainty remains that the true 'fortune' of Balbo, in his career was perhaps that of dying tragically before the most tragic pages of the war and of the subsequent epilogue of fascism were written. 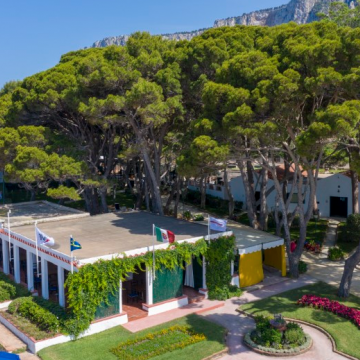 The Circolo della Vela Sicilia is one of the most prestigious yacht clubs in the Mediterranean located in Mondello. At the end of the victorious America's Cup 2017 the Royal New Zealand Yacht... see The Hotel Bellevue was founded in 1894, designed to accommodate a refined clientele and a lover of the mountains. There are numerous historical traces of characters who have chosen and appreciated... see