Born in: 0  - Died in: 0
The Colloredo family is a noble Friulian family that played an important role in the history of the Patriarchal State of Aquileia, exercising feudal power over a large territory and taking part in the Friulian parliament.
On December 4, 1302, the Patriarch of Aquileia Ottobuono of Razzi granted William of Waldsee, viscount of Mels, faculty to build a new castle on a hill owned by the family, at the villa of Colloredo, in the feudal jurisdiction of Mels; from this date the family began to appeal "Colloredo Mels".

Among the fiefdoms owned there were: the original castle of Mels, the city of Venzone, the castles of Albana and Prodolone (from which they took the name of two branches of the family) with the forts of Sattimberg and Monfort, Colloredo and then the feuds by Susans and Sterpo, Castel Dobra (Dobrovo) and Fleana (Fojana) (the latter two in present-day Slovenia), Sezza, Latisana and Sutrio. Outside the Friuli it possessed palaces in Mantua and Recanati, the castles of Opocno in Bohemia, of Libenau in Styria, of Wolpersdorf, of Ober Vobling, of Aggesbach and of Tullh in Lower Austria, the marquisate and the fortress of Santa Sofia in Tuscany.

Among the struggles of the Colloredo we remember those against the patriarchs of Aquileia, the counts of Gorizia, the Caminesi, the Savorgnan, the Torriani. It was ascribed to the nobility of Gorizia and the Holy Roman Empire in 1591 and obtained that of barons in Austria in 1624, the Sienese in 1627, that of Mantua in 1721 and finally that Milanese in 1761, accounts of the Holy Roman Empire from 1724. To that It is worth mentioning the appointment of Girolamo Colloredo as governor of Lombardy (1719-1725, under which the barriers to the canal were placed) and of Hieronymus Graf von Colloredo as Prince-Archbishop of Salzburg. Rudolph Joseph von Colloredo (1706-1788), Vice-Chancellor of Empress Maria Theresa, was elevated to the hereditary rank of Prince of the Holy Roman Empire in 1763.

The family was divided into various lines of which Asquino became extinct in 1738 and assets and titles were inherited by the Montecuccoli, that of Viscardo acquired the marquisate of Santa Sofia di Marecchiccia, a Tuscan fiefdom, that of Mannsfeld inherited with the marriage of Franz Gundakkar (1731-1807) with the last heir Maria Isabella (1771) titles and assets of the princes von Mansfeld (1780), with the right to merge the two surnames from 1789 (Colloredo-Mannsfeld).

The family also wore the dress of Malta, was awarded the title of Viscount di Mels in the eleventh century and obtained the title of Count of S.R.I. in 1824.

On commission of Count Carlo Ottavio of Colloredo, director of the Accademia dei Timidi, in 1767-69 Antonio Bibbiena realized in Mantua the Scientific Theater, eighteenth-century jewel of the city, where Mozart on January 16, 1770 held a concert in his first Italian tour , at the age of fourteen.
The first-born branch of the Colloredo family enjoyed the following noble titles: Counts of S.R.I., Lords of Colloredo, Mels and attached villas, Nobles with the preaching of these titles, Counts of the Austrian Empire, Nobles of Recanati. 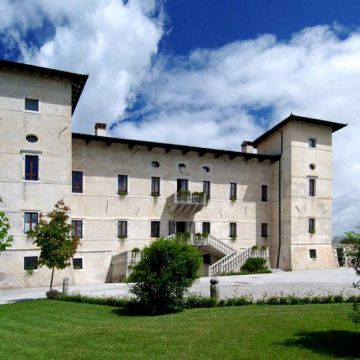 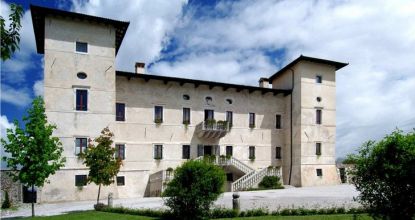